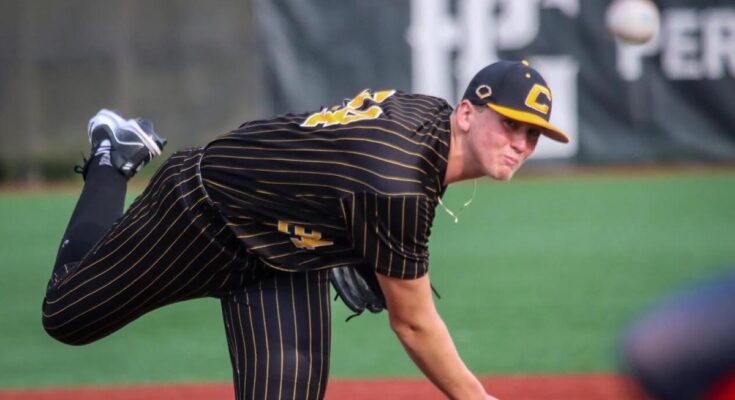 “Then I have my actual breakfast,” said Brooks, 17. “Like three or four eggs and some toast with peanut butter.”

It’s all part of a steady diet of eating up hitters intimidated by baseballs launched from the right hand of a 6-8, 245-pound pitcher still growing.

The fastball keeps getting faster, too.

It was 85 to 87 mph in the spring of 2019 when Brooks was a sophomore at Bishop England High School, then 88-90 at the end of last summer. It soared to 92-94 this summer as the rising senior dazzled his way across the national baseball showcase circuit.

“It will probably be 95 to 96 by the end of this fall,” said Brooks, who also plays basketball at Bishop England. “And probably 97 or 98 next spring.”

If you’re a batter, lean in for that outside part of the plate at your own peril.

If you hope to see Brooks in a College of Charleston uniform, forget it.

If you’re a fan, lobby your favorite team to draft this conscientious kid.

Nothing guarantees Brooks will pitch in 261 major league games, as Hanahan’s Bryce Florie did from 1994-2001.

Or that he will have the big-league success enjoyed by a couple of other large players from the Lowcountry, former Stratford High School teammates Matt Wieters (6-5, 235) and Justin Smoak (6-4, 220).

But there is no minimizing the progress or size. Brooks plans to pack on 30 more pounds of muscle over the next year.

Scouts from all 30 MLB teams followed along as Brooks struck out 28 high-quality batters over 17⅓ pressurized innings in elite summer events while pitching for the prestigious Evoshield Canes 17U travel team. They are more than intrigued by the idea of …

A 6-9, 275-pound flamethrower with command of a curveball and change-up. That can give a mediocre pitching coach a nice edge.