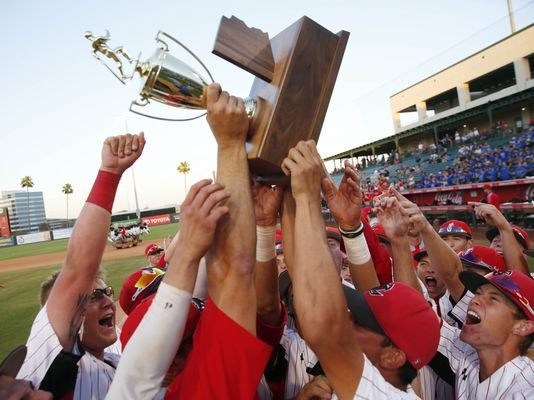 Peoria Liberty pitchers Chandler Murphy and J.D. Wadleigh were in trouble for much of the combined six innings they worked on Tuesday night.

But when they needed outs most, they delivered.

Murphy worked 4 1/3 innings and Wadleigh finished without giving up a run, as clutch Liberty captured the 5A state baseball championship with a 6-2 victory over No. 2-seed and emotionally depleted Buckeye Verrado at Tempe Diablo Stadium.

Verrado (27-5), which had a 19-game winning streak snapped, stranded 14 base runners after scoring two runs in the first inning off starter Cameron Bracke, who lasted one inning and one batter (a walk) in the second.

“We’re tough,” said catcher Brady Welch, who led the Liberty offense with three hits and two RBIs. “They beat us the first time. We should have won that game, too. That was the game we wanted. And we got it.”

Verrado beat Liberty 8-7 in early March. That game stuck in the minds of the Lions, who won their second state title and their first since 2010. This was their fourth state championship game in 10 years under three different coaches.

Verrado was playing in its first state final. And it came during the worst of times. A day after closer Bryan McKinsey died, Verrado gutted out a semifinal win Thursday against Scottsdale Notre Dame.

Verrado coach Mike Ward spoke to the media before and after that game. But he declined interviews after Tuesday’s state championship loss.

Liberty coach Chris Raymond felt he had the best pitching staff in the state, and hung in as long as he could with Murphy and Wadleigh.