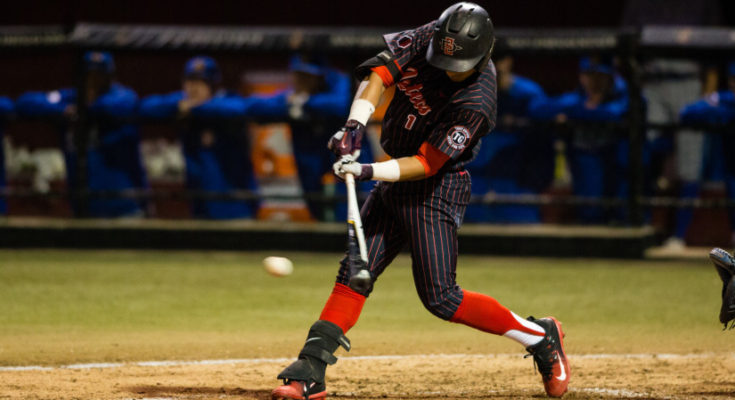 An eight-run second inning for the Lobos dug a hole for the Aztecs early on, as the pitching staff surrendered three hit by pitches, five walks, two hits, and a balk. A two-out error allowed the Lobos to score six unearned runs in the inning.

The Aztec lineup immediately began to chip away at the deficit, however, with Jacob Maekawadrawing a bases-loaded walk and Matt Rudick driving in Julian Escobedo on a groundout to second base to help the Aztecs plate a pair in the bottom of the second. SDSU posted another two-spot in the third inning, thanks to a well-hit RBI double in the left centerfield gap by Escobedo to score Dean Nevarez and Jordan Verdon.

The Aztecs scored added a run in the bottom of the eighth with an opposite-field triple by Isaiah Parra allowing Casey Schmitt to score.

New Mexico reliever Nathaniel Garley earned the victory, pitching 6.1 innings with only three hits allowed while not allowing an earned run and striking out nine.

Harrison Pyatt was dealt the loss, allowing two earned runs on four walks with two strikeouts over 1.2 innings. Casey O’Sullivan and Christian Winston teamed up to quiet down the Lobo bats in the late stages of the game, as the freshman duo combined to throw four shutout innings with only one hit allowed in the final four innings of the game.

–  It is the first series loss for the Aztecs this season. SDSU has won five of six weekend series in 2018, 11 of its last 14 Mountain West series, and 15 of its last 18 series overall.

– SDSU had its 24-game winning streak when scoring five or more runs come to an end.

– It is the first time in the 2018 season the Aztecs have suffered back-to-back losses. The Aztecs were a perfect 14-0 in its last 14 games following a loss entering tonight. SDSU has not lost three consecutive games since being swept by Nevada on May 1, 2016.

– SDSU has a five-game winning streak when outhitting their opponent snapped. The Aztecs are 14-4 this season when recording more hits than its opponent.

The Aztecs look to salvage the final game of the three-game series tomorrow with first pitch at 1:00 p.m. The Mountain West’s leader in wins and ERA Garrett Hill (5-0, 1.32 ERA) will take the ball for the Aztecs, while the Lobos will send RHP Cody Dye (2-3, 6.09 ERA) to the hill.