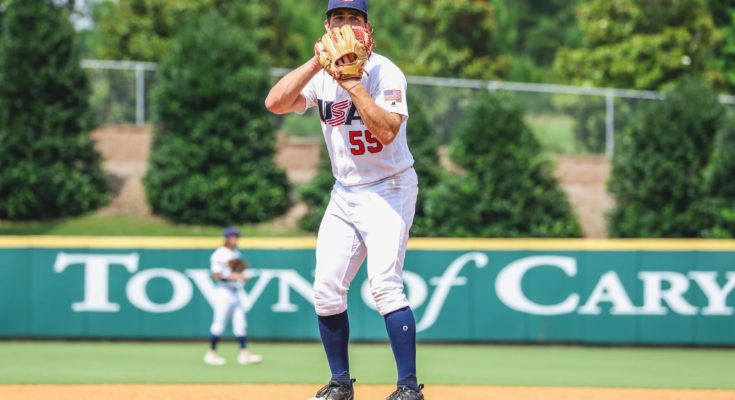 USA BASEBALL
Parker Caracci | RHP | Collegiate National Team
Caracci picked up right where he left off after an All-American campaign in 2018. One of the nation’s best closers, Caracci was selected for the USA Baseball Collegiate National team, and he didn’t disappoint, playing his way to a spot on the 26-man roster. The Jackson native made his first appearance on June 28 against Chinese Taipei, going one flawless inning, striking out two of the three batters he faced to help seal a 3-2 win. He comfortably earned two saves for Team USA, allowing just one baserunner in each one-inning save. In the Collegiate National Team’s series vs. Japan, Caracci delivered perhaps the biggest pitching performance of the five-game set. In Game 4, he went 3.1 scoreless innings, allowing just one hit and one walk to set the stage for a Team USA comeback to clinch the series. Caracci finished the season with a perfect 0.00 ERA in 9.2 innings of action, compiling a pair of saves and a .094 opposing batting average for the Collegiate National Team.

CAPE COD LEAGUE
Thomas Dillard | OF/C | Cotuit Kettleers
After his stellar sophomore season, Dillard headed back to the Cape and was on a tear for the Cotuit Kettleers, boosting his batting average as high as .370 before taking time off to take part in the College Home Run Derby. Upon returning to Cotuit, Dillard expanded on his role as a run producer, accounting for 35 runs in the 29 games that he appeared in. Dillard finished the season with a .250 batting average, 26 hits, and three home runs in his second stint in the Cape Cod League.

Greer Holston | RHP | Bourne Braves
Greer Holston was a key reliever for the Bourne Braves this season, appearing in eleven games, all in relief, stifling opponents and even adding experience at the closer position. The Rebel reliever furthered his late-game experience with the Braves, recording 20 innings with a 3.60 ERA and fifteen strikeouts. Holston picked up one save late in the summer, but mostly served as a vital mid-relief pitcher for his team.

Cooper Johnson | C | Bourne Braves
Johnson split time starting at catcher for Bourne and improved at the plate as the summer went on. The Rebel catcher showed off his defensive prowess with the Braves, but also expanded on his offensive game, finishing the year with a .150 batting average.

Jordan Fowler | LHP | Hyannis Harbor Hawks
Fowler, one of two Rebel pitchers with the Harbor Hawks, picked up some valuable experience in the Cape Cod League this summer. The upcoming sophomore made five appearances, four of them starts, en route to 15.1 innings of experience in the hallowed Cape. He averaged just over nine strikeouts per nine innings pitched.

Houston Roth | RHP | Hyannis Harbor Hawks
Roth was the most utilized arm on the Harbor Hawks’ pitching staff, who turned to him for the start eight different times throughout the summer, most on the team. He allowed just one run on three hits over four innings in his first start of the season, June 15 against Cotuit. The Oxonian allowed just two earned runs on four hits in his following outing. On June 27 against Brewster, he went 4.2 innings without allowing an earned run on just three hits. Roth finished with 32.0 innings of work under his belt, with 33 strikeouts compared to just 13 walks, and a 5.90 ERA.

Will Ethridge | RHP | Falmouth Commodores
Ethridge made two relief appearances and two starts for Falmouth this summer. He gave up no runs on just one hit, going 0.2 innings to open up his Cape campaign. In his first start of the summer, he went 3.2 innings, allowing five runs on four hits and a walk. He finished the year with almost an even ten innings under his belt, and one strikeout for each inning he pitched.

CAL RIPKEN LEAGUE
Tim Elko | IF | Baltimore Redbirds
Finding his hitting stroke late in the summer, Elko ensured that out of the four best batting averages this postseason on the Redbirds, three of them were representing the Rebels. He finished fourth on the team with a .294 batting average in the playoffs, .283 in the regular season, to go along with his 46 hits and 27 RBI in 41 appearances this summer. Elko and the Redbirds, along with his teammates Carl Gindland Anthony Servideo, went on to be crowned as co-champions of the Cal Ripken League.

Carl Gindl | OF | Baltimore Redbirds
Gindl hit it as well as anyone in the Cal Ripken League this season en route to an All-Star nod. He trailed only Anthony Servideo and one other player in league batting average (.383), and finished tied for third in stolen bases (20). Gindl opened his summer on a nine-game hitting streak and was only been held hitless nine times in 35 games. Gindl and the Redbirds, along with his teammates Elko and Anthony Servideo, went on to be crowned as co-champions of the Cal Ripken League. Gindl took home Championship Series MVP honors as well.

Anthony Servideo | IF | Baltimore Redbirds
Servideo joined Gindl on the Cal Ripken League All-Star team, and he was right next to him at the top of the league hitting charts. Servideo finished highest on his team among qualified players with an astonishing .391 batting average, edging Gindl by just eight-hundredths of a percentage. Servideo finished second in the league in batting average (.391), second in on-base percentage (.517), tied for first in runs scored (35) and first in triples (8). At one point in the season, he saw a 10-game hitting streak snapped at the end of a tremendous week: .444, 2 2B, 4 3B, 8 RBI. Servideo led the entire Cal Ripken League in postseason home runs with three, two more than any other player around the league. Servideo and the Redbirds, along with his teammates Gindl and Elko, went on to be crowned as co-champions of the Cal Ripken League.

CALIFORNIA LEAGUE
Chase Cockrell | DH/OF | Conejo Oaks
Cockrell wasted little time getting going for Conejo, going 4-for-5 with a double and a run scored in his 2018 summer league debut. The Rebel DH experimented with a stint in the outfield, and he continued his usual excellence at the plate. He finished with a .333 batting average, 12 extra base hits, and 23 RBI during his time with the Oaks.

Michael Spears | OF | Conejo Oaks
Appearing as the Oaks’ center fielder, Spears found his bat late for Conejo, hitting .444 over one stretch with two doubles and four runs scored. Spears completed the diamond 20 times over the summer, good enough for the second most runs on the team, while the young Rebel led the Oaks in walks (16) and stolen bases (15). Spears finished the year with a .242 batting average with 22 hits in 91 at-bats.

NORTHWOODS LEAGUE
Jacob Adams | IF | Fond du Lac Dock Spiders
Adams had a strong summer for Fond du Lac, pushing his batting average as high as .279 at one point in early July. He helped lead the Dock Spiders to the Northwoods League Championship with a .248 batting average, 36 hits, and 17 RBI. The speedy middle infielder also finished second on the club with eight stolen bases.

Cole Zabowski | 1B | Fond du Lac Dock Spiders
After an outstanding sophomore campaign, Zabowski carried his play over into summer ball. He served as an offensive standout in the Dock Spiders’ run to the league championship, batting .290 with 54 hits, 12 of them for extra bases. Zabowski led the team in both doubles (8) and home runs (4) as the Rebel deep threat continued his breakout season into the summer.

PERFECT GAME LEAGUE
Max Cioffi | RHP | Albany Dutchmen
Cioffi started his Ole Miss career strong, and he did the same in summer ball. Cioffi was effective in his stint in the Perfect Game League, finishing the year with a spotless 2-0 record and a 3.11 ERA. The rising sophomore appeared in five games, two of them in starting roles,while striking out 18 in his 17.1 innings of work.

SUNBELT LEAGUE
Ray Falk | RHP | Brookhaven Bucks
Falk opened to a tremendous start with the Bucks, holding a perfect 0.00 ERA through 8.2 innings of work – including a save – and kept it up through the end of the year. He made appearances in nine games, including one start, and struck out 13 in the 14.2 innings that the Rebel was on the mound for the Bucks.

Pierce Smith | LHP | Brookhaven Bucks
Much like his Brookhaven teammate, Smith began his season on a tear and recorded valuable experience with the Bucks. The Rebel southpaw made nine appearances, all in relief, and finished the year with a 4.61 ERA. The Georgian posted a similar stat line to his teammate Falk, recording 13.2 innings and striking out 16, to go along with one save earned.