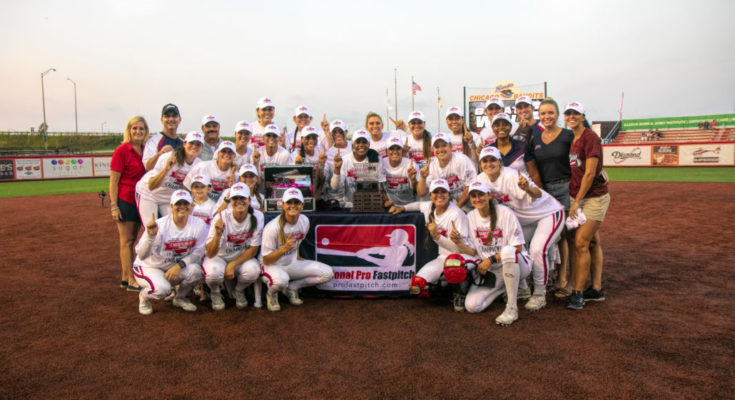 After three consecutive years of frustration in the postseason, the USSSA Pride can lay claim to the Cowles Cup championship. The Pride capped off a historic 2018 season with a 4-0 win Saturday night at Parkway Bank Sports Complex to secure a three-game sweep of the Chicago Bandits in the Championship Series.

Second-year right-hander Jessica Burroughs led the way for the Pride, who built their record 42-win campaign behind a dominant pitching staff and solidified their place in the history books with another shutout to earn the franchise its first Cowles Cup since 2014.

Burroughs scattered four hits across 4.1 scoreless innings and allowed the powerful Pride lineup to ease its way into the decisive Game 3. Former Michigan standout Sierra Romero broke a 0-0 tie with an RBI single through the left side in the fourth off Bandits rookie right-hander Aleshia Ocasio.

The Pride went on to plate two more runs in the frame and provide plenty of support for Burroughs. Southpaw Delaney Gourley and veteran right-hander Jolene Henderson secured the championship over the final 2.2 innings and stuck out a combined three.

NPF Player of the Year Brenna Moss appeared to score the game’s first run off Burroughs in the opening frame when she tagged up to score on a sacrifice fly off the bat of Courtney Gano. However, after the Pride dugout launched an appeal, the umpiring crew declared Moss left the base early and took the run off the board.

The Bandits recorded just three hits after the first, two of which came from Moss, and could not string together enough baserunners to chip away at the deficit.

Moss’ two-out single in the seventh put the potential tying run in the on-deck circle for the Bandits, but Pride center fielder Allexis Bennett tracked down a liner to seal the title.

USSSA celebrated its first championship since Cat Osterman led the franchise to the 2014 title in two games over the Akron Racers. Pride shortstop Shelby Pendley earned the Most Valuable Player award.

Meanwhile, the Bandits conclude another successful season, in which they recorded the second-most victories (37) in the franchise’s 14-year history.

National Pro Fastpitch (NPF), an Official Development Partner of Major League Baseball since 2004 provides elite female athletes with an opportunity to pursue a professional career in fastpitch softball beyond their collegiate and amateur success. The NPF affiliate teams consist of the Aussie Spirit, Beijing Shougang Eagles, Chicago Bandits, Cleveland Comets and USSSA Florida Pride for the 2018 season. National Pro Fastpitch players hail from the United States, Australia, Canada and China among which are the most accomplished and talented athletes in the sport of women’s softball.