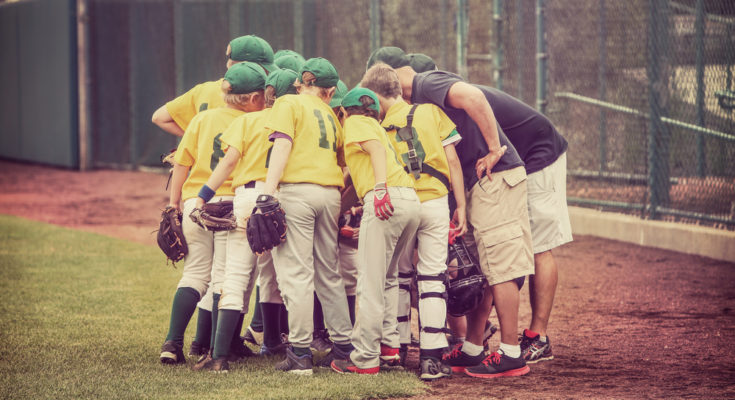 Throughout the season, in almost every set of bleachers at Little League® fields everywhere, there will be discussions about certain rules and regulations that parents and other spectators have questions about. Here are some of the most common rule misconceptions and answers to help provide clarity.

Must a runner slide into home plate?

No. Little League does not have a “Must Slide” rule for a runner sliding into home or any other base. However, any runner is out when the runner does not slide or attempt to get around a fielder who has the ball and is waiting to make the tag.

How many batters does a pitcher need to hit in an inning to be removed?

There is no rule in Little League Baseball® or Little League Softball® that specifies the number of batters a pitcher hits before they are removed. Also, there is no specific rule that mandates a warning be given.

What is the rule when a player runs out of the baseline to avoid a tag?

Any runner is called out when running more than three feet away from the baseline to avoid being tagged, unless such action is to avoid interference with a fielder fielding a batted ball. A runner’s baseline is established when the tag attempt occurs and is a straight line from the runner to the base to which he or she is attempting to reach. It is important to note that in order to enforce this rule, the defense must attempt to tag the runner.

Who “owns” first base – the runner or the Little Leaguer® playing first?

Is it a balk/illegal pitch if a pitcher drops the ball on the mound?

Can pitchers wear long sleeve shirts and/or sleeves under the uniform?

Baseball and Softball: Any part of the pitcher’s undershirt or T-shirt exposed to view must be of a solid color. Baseball: The pitcher’s undershirt sleeves, if exposed, cannot be white or gray. Neoprene sleeves, if worn by a pitcher, must be covered by an undershirt. Softball: Neoprene sleeves are approved for play unless the umpire determines them to be distracting and must be of a solid color. Pitchers may not wear sweat or wrist/play-calling bands.

Can a pitcher go to his/her mouth on the mound?

In all divisions of Little League Baseball, a pitcher is permitted to bring his or her pitching hand in contact with the mouth or lips while in the 10-foot circle (18-foot circle in the Little League Intermediate (50/70) Baseball Division and above) surrounding the pitcher’s plate, provided he/she distinctly wipes of the pitching hand before contact in the ball. In instances such as cold weather, if both managers and the umpire agree prior to the game, a pitcher can be permitted to blow on his/her hand while in the circle. The penalty for violating this rule is a ball being awarded to the batter. Repeated violations can cause the pitcher to be removed from the game.

In all divisions of Little League Softball, the pitcher is permitted to bring the hand in contact with the mouth, provided the fingers/hand are distinctly wiped off before touching the ball. A pitcher shall not apply a foreign substance of any kind to the ball, pitching hand, or fingers. Under the supervision of the umpire, powder rosin may be used to dry the hands.

EXCEPTION: If the pitcher reaches the 20-pitch limit (15- and 16-year-olds: 30-pitch limit) while facing a batter, the pitcher may continue to pitch, and maintain their eligibility to return to the catcher position, until any one of the following conditions occur: (1) that batter reaches base; (2) that batter is retired; or (3) the third out is made to complete the half-inning or the game.

When must a coach make an appeal?

Any appeal of a possible playing rule violation must be made before the next pitch, play, or attempted play. An appeal is not considered a play. If there is the potential of a “Batting Out Of Turn” infraction, it must be appealed before a pitch is delivered to the next batter of either team or a play or attempted play.

Does the batter need to avoid being hit by a pitch?

A player must make some type of attempt to avoid being hit by a pitched ball. Determining if an attempt was made is determined by the umpire.

Are hands part of the bat?

No. The hands are part of the batter’s body. Should a ball come in contact with the batter’s hands, an umpire must judge if the ball hit the bat or the batter first; determine if the pitch was in the strike zone, and make the appropriate ruling.

Do Little Leaguers need to play two years in the Minor division before moving to the Major division?

Are sunglasses allowed on hats?

Do all males need to wear an athletic supporter?

Is food allowed in the dugout?

There is not a Little League rule or regulation that specifically prohibits it. Allowing food in the dugout should be determined by the local league and/or each team’s manager.