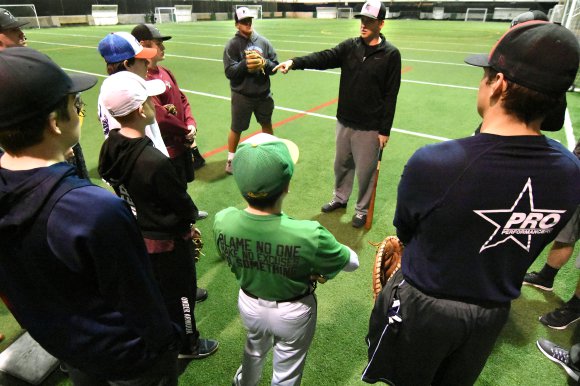 Just outside Morgantown, located at Mylan Park, there has been something special building over the last decade. If you drive along Mylan Park Lane, you won’t find construction sites, at least which pertains to this, because what has been created isn’t tangible, but more of a consciousness. Even more so, it’s a collective awareness by a group of former and current baseball players ready to encourage young athletes to discover themselves in ways they didn’t know were possible.

Andy Altemus, director of baseball at Pro Performance, is managing a program, Pro Elite Baseball, dedicated to helping young baseball and softball players hone their skills, showcase their talents to collegiate scouts and maybe even offer a path to play professional baseball. But don’t be fooled into thinking that this program is a golden ticket to the Big Show.

Sure, guys like David Carpenter, pitcher for the Arizona Diamondbacks organization, or Jedd Gyorko, infielder for the St. Louis Cardinals, are familiar faces to the program and provide their expertise from time to time, but these are just a few perks of what Pro Elite has to offer. What you will find more obtainable is a staff that has dedicated their lives to baseball and look to help any athlete willing to put in the work, an opportunity to improve their lives on and off the diamond.

“My whole goal really is to prepare a kid from the beginning stages, from middle school to high school, to go to college,” Altemus said. “If the kids come here and have the opportunity to improve and really dedicate themselves, they can pay their parents back by getting a college education. If you have an opportunity to play a sport in college, that’s awesome. I wouldn’t trade my experiences for anything.”

Perhaps no one knows the benefits of the Pro Elite program better than Altemus, who participated in its grassroots days on Bakers Ridge Road and eventually played his way through college into the San Francisco Giants organization.

“I started here when it was just a small building out by University High,” Altemus said. “And it was really intense. There were a lot of former WVU guys there and our workouts were to the point where you either perform and you do what you’re supposed to do, or your out.”

The former WVU pitcher admits that the program isn’t as intense as it was once was, but the underlining message hasn’t changed much since Pro Elite’s conception
12 years ago.

“A kid comes in here and they’re not bigger than the system because the system has been so successful and has been pumping out kids for a while,” Altemus said. “We’ve learned from our mistakes and learned how to improve our staff along with our strength program and we really look to take the kids that normally wouldn’t get a chance to go to college, and give them that opportunity.”

Pro Elite’s success rate more than speaks for itself as they’ve had over 100 players associated with the program go on to play at the collegiate level, including over 40 in the past five years. Twenty-five professional players have utilized Pro Elite including area athletes Carpenter and Gyorko. While Carpenter didn’t come up through the program himself, as an instructor, he heralds the effort that Altemus and his staff put forth for area kids.

“Andy really wants to get the local guys involved that went on to do well in their careers to come and give back to these kids and give them an opportunity to go to college,” Carpenter said. “In this area, sometimes there isn’t anyone to guide these kids in the right direction as far as giving them chances to visit schools or have the contacts to reach out to these schools. To have those kinds of contacts that guys like Andy and myself have are so valuable to give that opportunity and that’s very important to us.”

Carpenter went on to say that the program is about discipline and work ethic as much as it is improving your skills.

“Baseball is a game of failure, just like a lot of things in life are,” he said. “You can do all the right things, but that doesn’t mean good things comes right away. Just like life, you can’t be an overnight success. It doesn’t work that way. You have to be put all your heart and mind into becoming successful over time.”

One tool Pro Elite uses is a fall showcase where the kids can show the work they’ve put in for coaches around the state and even the country.