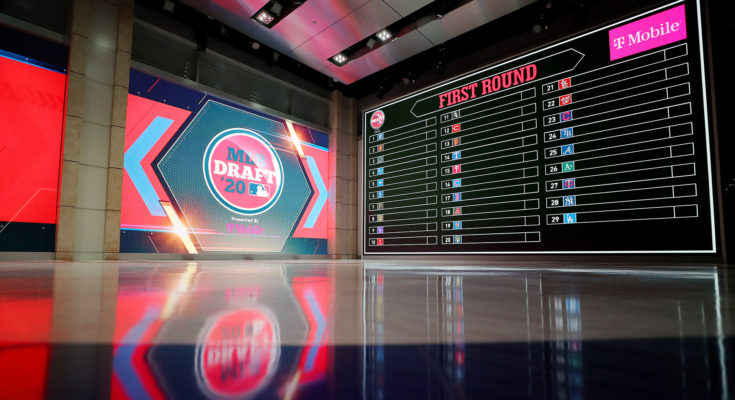 The 2020 Draft starts Wednesday. Who will your team pick? Will it land a future superstar? Fans can follow along as the action gets underway.

Here’s how to watch the Draft, and what to watch for.

How do I watch?
Wednesday: The 2020 Draft begins at 7 p.m. ET with live coverage on MLB Network and ESPN. The Draft will also stream live on MLB.com. MLB Network is airing a preview show leading up to Day 1 of the Draft starting at 5 p.m. ET.

The first night of the Draft spans picks 1-37 — the first round and Competitive Balance Round A.

Thursday: Coverage of Day 2 of the Draft begins at 4 p.m. ET with MLB Network’s preview show. The Draft resumes with the start of the second round at 5 p.m. ET on MLB Network and ESPN2, plus live streaming online at MLB.com.

The Draft coverage will run through the end of the fifth and final round. There are 160 total picks in the 2020 Draft, which was shortened to five rounds as a result of the coronavirus pandemic.

MLB Draft experts Jim Callis and Jonathan Mayo will be providing analysis along the way. MLB.com will have coverage throughout the Draft on Draft Central and via the interactive Draft Tracker, which includes a searchable database of Draft-eligible players. For bios, scouting reports and more on the top players in the 2020 Draft class, check out MLB Pipeline’s Top 200 Draft prospects.

Every selection will be tweeted live from @MLBDraftTracker, and you can also keep up to date by following @MLBDraft.

Who has the top pick?
The Tigers. Detroit holds the No. 1 overall pick for the second time in three years after finishing with the Majors’ worst record last season. In 2018, they drafted Casey Mize first overall, and the right-hander is now MLB’s No. 7 prospect.

Who will the Tigers take in 2020? The choice could come down to Spencer Torkelson vs. Austin Martin. Torkelson looks like the consensus pick. He’s MLB Pipeline’s No. 1 Draft prospect, an elite power-hitting first baseman from Arizona State. But Martin, ranked No. 2, might be the best pure hitter in the Draft class, so there’s a case for the Vanderbilt center fielder/third baseman. Officials from other clubs would be surprised if the Tigers don’t take Torkelson, but Martin plus Texas A&M left-hander Asa Lacy, Georgia right-hander Emerson Hancock and New Mexico State middle infielder Nick Gonzales — the Nos. 3, 4 and 5 Draft prospects — are believed to be the other finalists Detroit is considering.

Drafting in the top 10 after the Tigers: the Orioles, Marlins, Royals, Blue Jays, Mariners, Pirates, Padres, Rockies and Angels.

The Orioles are picking No. 2 overall, but they have a much higher competitive balance pick than Detroit — Baltimore has the No. 30 overall pick, and the Tigers have No. 62. That makes the Orioles’ total bonus pool larger than the Tigers’, as higher picks have higher slot values.

What are the biggest Draft story lines to watch?
Here are four things to keep an eye on during the Draft:

How college-heavy will it be at the top?

The strength of this Draft is clearly college pitching, a stark contrast to a year ago when college arms were the biggest weakness. There’s also a better-than-usual crop of college bats, starting with projected No. 1 overall pick Torkelson. As a result, eight or nine of the first 10 selections could come from the college ranks.

How many college pitchers go in the first round?

Starting with left-handers Lacy (Texas A&M) and Reid Detmers (Louisville) and right-handers Hancock (Georgia) and Max Meyer (Minnesota), this Draft is loaded with college arms. There are at least 15 college pitchers getting mentioned as first-round possibilities, and the supplemental first round and the second round are going to feature several of them as well.

What will happen with the high school arms?

There’s a trio of high school pitchers who most believe to be first-round talents, and those three — Mick Abel in Oregon, Jared Kelley in Texas and Nick Bitsko in Pennsylvania — should go early enough and be offered enough of a bonus to sign. While the pitching in the 2020 Draft class isn’t as deep on the high school side as the college side, there is a decent next tier of prep arms. But that is one group that could be impacted by this year’s shorter Draft and smaller bonus pools.