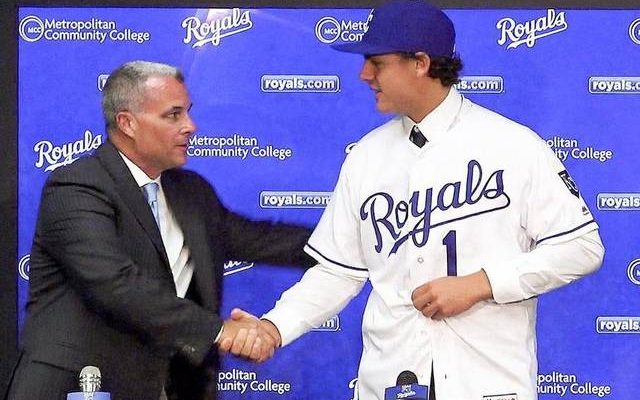 Nick Pratto, the first baseman selected in the first round by the Royals out of high school in the 2017 draft, tops the list of prospects in the organization according to the top ten ranking provided by Baseball America.

Pratto, a left-handed hitter out of Huntington Beach, California, hit .247/.330/.414 with four home runs in 52 games of Arizona Rookie ball last year. Baseball America writer Bill Mitchell writes that Pratto profiles as a “middle-of-the-order hitter” with a smooth swing and an approach to all fields, and seems confident that the 19-year old will develop more power.

Another young hitter comes in at #2 on the list, with outfielder Khalil Lee praised for his power and bat speed. Mitchell raises concerns about Lee’s mechanics but adds that his strikeout rate should not be a concern because of his high walk rate. Lee hit .237/.344/.430 with 17 home runs, 65 walks, and 171 strikeouts in 121 games for low-A Lexington last year.

Outfielder Seuly Matias, who comes in at #3, may have the best power potential in the system for the Royals. While he has plate discipline issues, Mitchell notes that Matias improved at chasing breaking pitches. Matias hit .243/.297/.423 with seven home runs in 57 games for rookie ball Burlington.

Pitchers Josh Staumont, Eric Skoglund come in at #4 and #5, with 2017 draft pick M.J. Melendez, a catcher, at #6. Infielder Nicky Lopez comes in strong at #7 with Hunter Dozier at #8 despite an injury-filled season. Pitchers Foster Griffin and Scott Blewett round out the list. Mitchell writes that Pratto, Matias, and Lee all have the potential to be “impact bats”, but that the pitching is very thin in the organization.

The system is not particularly strong right now, but with trades, potentially five picks in the top 50 of this June’s draft, and a larger international bonus pool this summer with no restrictions, the Royals could change this list quickly in a year. Will the front office be up to the task?