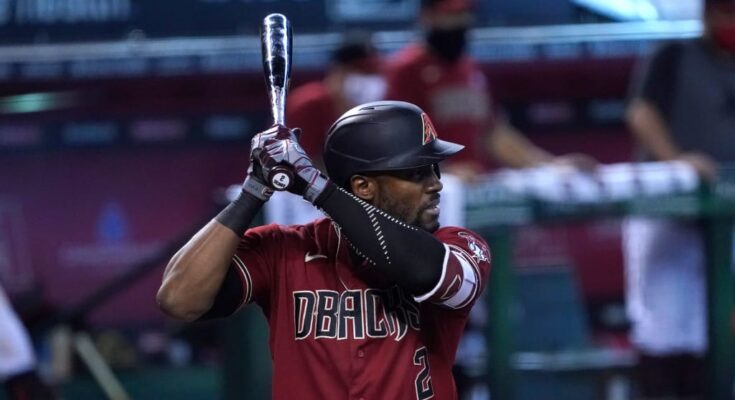 Leading up to the Trade Deadline on Aug. 31, MLB.com is keeping track of every deal right here. Trades with an asterisk (*) have not officially been announced by the clubs involved yet.

Aug. 31:* Rockies acquire OF Kevin Pillar and cash from Red Sox for a PTBNL and international bonus pool money

After acquiring Marte from the Pirates for two Minor Leaguers and international bonus pool money in the offseason, the D-backs have flipped the veteran outfielder to the Marlins for three players. Marte, who has a $12.5 million club option with a $1 million buyout next season, owns a .311/.384/.443 slash line over 33 games this season.

After losing 105 games in 2019, the Marlins are in the thick of the postseason race, entering Monday with a 14-15 record, tied with the Phillies for the second automatic playoff berth in the National League East. Miami was able to use its pitching depth to nab the 31-year-old Marte, sending Smith and Mejía to Arizona along with a player to be named later.

Smith, a 29-year-old who is under control through 2023, has shown promise in recent seasons, striking out 10 batters per nine innings. Mejía, 23, made his big league debut earlier this season and has logged a 5.40 ERA in 10 innings spanning three starts. More >

The American League West-leading A’s get the rotation piece they were looking for in Minor, who has struggled to the tune of a 5.60 ERA this season but had a 3.59 ERA with 200 K’s in 208 1/3 innings last season.

Minor’s fastball velocity is down a couple ticks in 2020, but he fired six scoreless innings with six strikeouts against the Dodgers his last time out to boost his trade value. The left-hander can become a free agent after this season. More >

After acquiring Taijuan Walker last week, the Blue Jays pick up another veteran starter here. A free agent after this season, Ray once again has a high strikeout rate (27.9%), but he also has allowed an MLB-worst 31 free passes in 31 innings. Walks have been a persistent problem for Ray, who has issued a base on balls to nearly 11% of the batters he has faced in his career.

In exchange for Ray, Arizona gets back Bergen, a 26-year-old lefty who has made 22 appearances in MLB with a 5.06 ERA over 21 1/3 innings. Like Ray, Bergen has struggled with his command, allowing 4.6 BB/9 in Triple-A and posting a 4.2 mark in the big leagues. More >

The Padres have been MLB’s busiest team leading up to this year’s Deadline, and they made their biggest move yet to acquire a frontline starter in Clevinger, a 29-year-old righty with two years of team control remaining after this one.

Hedges was expendable after San Diego added catchers Jason Castro and Austin Nola in separate trades on Sunday, and the Padres will send Cleveland their Nos. 7, 9 and 11 prospects in addition to Naylor and Quantrill.

Clevinger was involved in some controversy earlier this season when he and teammate Zach Plesac broke team protocols, but it’s unclear how big of a role the incident played in the Indians’ decision to deal Clevinger, who has been one of the game’s best pitchers over the past four seasons, posting a 152 ERA+. More >

The Padres made a late-night deal to cap a busy day, and it was a big one, involving seven players. San Diego further bolstered its catching depth with Nola, who can also play first base and other positions around the field. He has been hitting well so far in 2020, slashing .306/.373/.531 in 29 games for Seattle; he’s also under team control through the 2025 season.

Trammell was the Padres’ No. 5 prospect per MLB Pipeline, and No. 60 overall. He has a lot of upside and both Torrens and Muñoz could be intriguing pieces for the future in Seattle. France, meanwhile, is hitting .309 in 61 plate appearances this season.

The Padres continued to make a flurry of moves as the Trade Deadline approached, adding Castro in hopes of improving the anemic offensive output San Diego has received out of the catching position so far in 2020. Castro is hitting just .192, but his on-base percentage of .323 represents a significant upgrade from what the Padres have been getting from their catchers in that department. Reyes, 27, made his Major League debut for San Diego last year, posting a 7.62 ERA in 27 relief appearances.

Givens, a veteran reliever, is in the midst of a career year. The 30-year-old, who pitched at least 63 innings in each of the past four seasons, had a 1.38 ERA in 12 appearances for Baltimore. His 19 strikeouts in 13 innings come with a career-best 37.3% K-rate that ranked 19th in the Majors entering Sunday (minimum 10 innings). With Baltimore losing 10 of its last 12 coming into the day, Givens now jumps back into postseason position with the Rockies, whose 5.81 reliever ERA is the third highest in MLB. Givens isn’t set to reach free agency until after next season, so he could be a key cog in the Colorado bullpen through at least 2021.

Vavra (No. 7) and Nevin (No. 14) both ranked among the Rockies’ top 30 prospects, per MLB Pipeline, and now join Baltimore’s rebuilding project. MORE>

Moreland is mashing like never before in 2020, batting .328/.430/.746 with eight home runs and 21 RBIs in 22 games. The 34-year-old veteran remains a big-time threat against right-handed pitching, and with Boston entering Sunday in last place at 11-22, it made sense to deal him to a contender. The 20-15 Padres are that team, sitting firmly in playoff position, and while Eric Hosmer figures to continue holding down first base, San Diego hasn’t established a regular DH, getting a relatively modest .254/.326/.431 line from that spot. Moreland, with championship experience from the 2018 Red Sox, can step into that role for the stretch drive and into October. With a $3 million club option for 2021, he also may not be purely a rental.

By parting with Moreland, meanwhile, Boston adds some much-needed young talent. At the time of the deal, Potts ranked 16th and Rosario 19th in a highly touted Padres farm system. MORE>