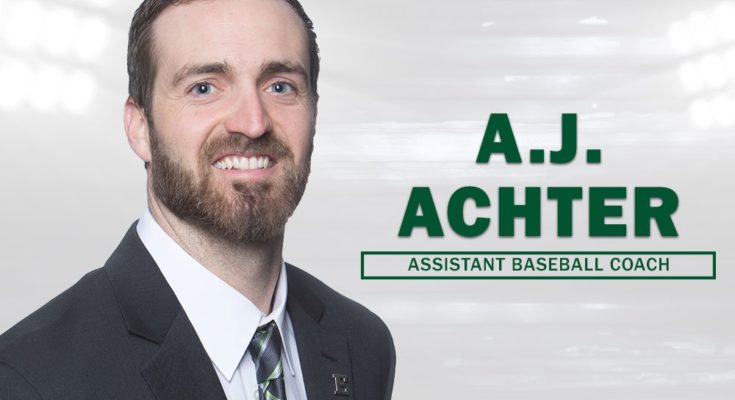 “I am absolutely thrilled to be the pitching coach at Eastern Michigan,” Achter exclaimed. “Eric and I have a great relationship going back to our battery days and am looking forward to working with him again. I want to thank Eric, Scott Wetherbee, and Andy Rowdon for this wonderful opportunity. I’m excited to get to work with the pitching staff and try to pass on what I learned throughout my playing career.”

Achter will be the only coach on a Division I baseball staff in the state of Michigan to have prior MLB playing experience, while being just one of two in the Mid-American Conference, joining Kent State Head Coach Jeff Duncan.

A native of Toledo, Ohio, Achter spent the last eight years in professional baseball, including three seasons in the big leagues with the Minnesota Twins (2014-15) and Los Angeles Angels (2016). Most recently, Achter was in the minor league system of the Detroit Tigers during the 2017 season. In his three-year MLB career, the right-handed pitcher went 2-1 with a 3.92 ERA in 62.0 innings, while striking out 33.

“We are extremely excited to have A.J. and his wife Kaiti become a part of the Eagle baseball family,” Roof added. “A.J. had an unbelievable career as a player. Playing eight years professionally, and spending parts of three years in the major leagues provides instant credibility. His impact will pay immediate dividends to the program in the classroom, in player development, and in recruiting. He is a difference maker and, on top of all his accomplishments on the field, he is an even better person. We are thrilled to have him join the Eagle family.”

In his minor league career, Achter was a four-time all-star in the Twins’ minor league system, including twice at the AAA level with the Rochester Red Wings. In eight seasons in the minors, Achter racked up 24 wins while pitching to a 3.11 ERA and tallying 442 strikeouts.

Achter was drafted out of Michigan State University in the 46th round of the 2010 draft after spending three seasons as a starting pitcher for the Spartans. Achter and Roof were teammates on the 2008 and 2009 teams while at MSU. A two-time Academic All-Big Ten selection, Achter had an all-star season in the Cape Cod League in the summer of 2010, which led to him signing with the Twins and starting his professional career.

A 2007 graduate of Oregon Clay High School, Achter was a standout athlete for the Eagles, lettering in baseball, basketball, and football. He was a First Team All-Ohio selection on the diamond, as well as being named the Toledo City League Player of the Year in 2007. He gained national recognition by Baseball America, being tabbed as their No. 5 prospect in the state of Ohio.

Achter is the son of Rod and Cindy Achter. His father played football at the University of Toledo, and was eventually drafted into the NFL by the Minnesota Vikings, while also playing for the Cincinnati Bengals and New York Jets. He has two siblings, a sister, Amanda, and a brother, Austin. Austin played a season of baseball at Ohio State University.

Achter resides in Brighton with his wife, Kaiti, a second degree nursing student at EMU, as well as their dog, Izzy.