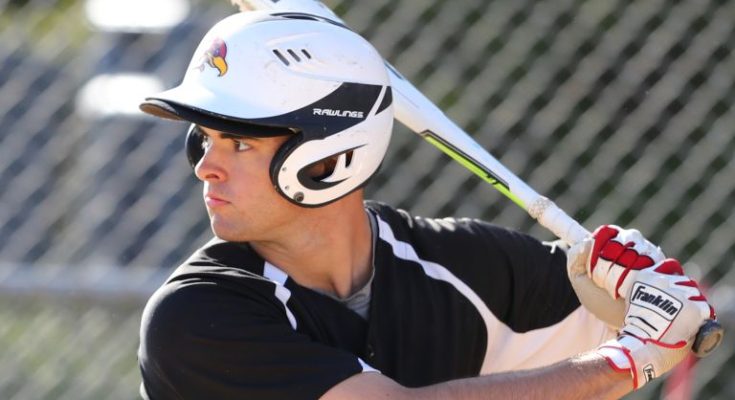 There are a few faces you may see on baseball cards someday. The draft stock of these players will be impacted by how well they perform in the next few months.

Of course, the two juniors, Commack centerfielder Tim McHugh and Kellenberg pitcher Jason Diaz will have the next two years to improve their pro draft status.

They are five of Long Island’s top players heading into the 2018 season.

Hogan is pain free. And that is scary news for opponents. The 6-1, 192-pounder, who is committed to play at Vanderbilt, is prime for a big year in Suffolk III. And it’s all about his health.

Hogan was forced to wear a back brace for three summer months after he was diagnosed with a bone stress reaction that causes inflammation in the lower back. He shed the brace in September.

“The brace was designed to keep his back in place so it could heal and not fracture,” Hills East coach Tim Belz said. “He tried to play through the pain in his junior year but he struggled and couldn’t get stretched out. He was never comfortable.”

The lefthanded hitter, a five-year varsity player, batted .355 as a freshman and .380 as a sophomore with six home runs and 26 RBIs and was named All-Suffolk.

“The toughest experience in my life and I should have just sat out my junior year,” said Hogan, a righty who also throws 89-91 mph. “I couldn’t bend and tie my shoes without my back aching. I’d swing and have excruciating pain. I’m so happy to be back. I love this game more than anything.”

Belz knows Hogan is motivated to lead the T-birds.

“He’s physically more mature, stronger and feels great,” Belz said. “He’s our Friday night milk and cookies guy — the perfect kid. It’s hard to believe guys like him still exist, but he’s right here at Hills East. Pro scouts are all over him. And he’s dangerous, he feels like he has a lot to prove.”

Waking up at 5 a.m. on a cold winter day is just punishment for most. But not O’Hoppe. His best work was done in the hours before sunlight.

“There is a level of dedication that only the superior athletes know,” St. John the Baptist coach Casey McKay said. “Those athletes, like Logan O’Hoppe, will get where they’re going because they go to the academy early in the morning and put in the extra work. The work when no one is watching.”

O’Hoppe, a 6-3, 215-pound East Carolina commit, is expected to be taken in the MLB draft in June. His defensive skills have grabbed the attention of scouts from at least seven teams.

“If opponents run, they steal on the pitcher’s delivery not on O’Hoppe,” McKay said. “He threw out 60 percent of the base stealers last year. His pitchers are comfortable throwing to him and he calls all the pitches. He has a cannon for an arm but he’s smart and doesn’t throw the ball around.”

O’Hoppe is also an offensive threat, hitting .388 with an on-base percentage of .463 as a junior.

He was born in Santo Domingo and came with his parents to the United States in grade school. He played middle school baseball in Lindenhurst before moving to Copiague, where he has matured into the ace of the pitching staff.

“There is a slight language barrier for him that can be difficult,” Copiague coach Bill Bennett said. “His parents don’t speak any English. And he’s had some learning hurdles but he’s made huge strides socially and those adjustments have helped him in the classroom.”

The 6-2, 185-pound lefthander has been visited by more than 20 MLB teams. He struck out 35 in 19 innings as a junior and worked with private pitching instructor Paul Parsolano through the fall and winter.

Now Parra let’s his game do all the talking. He communicates through his 92-mph fastball, vastly developed changeup and a nasty slider. His curve is of major league quality with such late break it freezes batters.

“I’m in contact with all the northeast area scouts,” said McKay of the San Jacinto JC commit. “Most clubs have been here to see him. He wants to play pro ball and I believe we’ll see him in the show some day. He continues to grow and get stronger and he has an endless ceiling.”