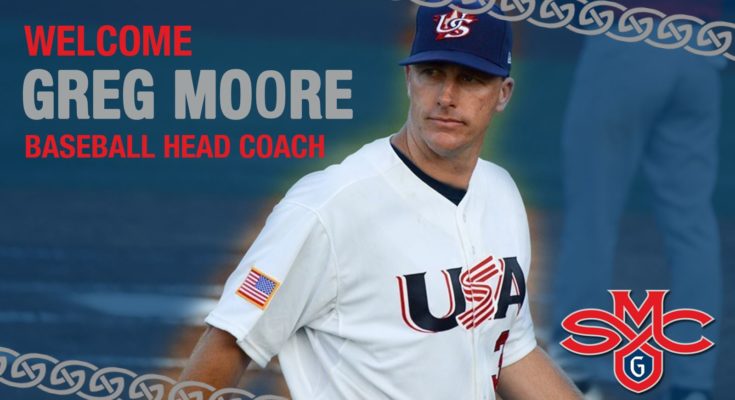 Saint Mary’s College Director of Athletics Mike Matoso announced today the hiring of Greg Moore as the new head baseball coach of the Gaels. Moore previously served as the head coach for Cal State Northridge over the past six seasons.

“We are thrilled to announce Greg Moore as our new head baseball coach at Saint Mary’s College. Greg has strong WCC roots, as this is where he started his career as a student-athlete and coach. He understands the conference and the balance between academics and athletics,” Matoso said. “He is considered one of the top pitching coaches in the country, a tireless recruiter and a strong leader. We look forward to the continuation of raising the level of our baseball program and welcome him and his family to the Gael family.”

At Cal State Northridge, Moore changed the culture of the CSUN Baseball program both on and off the field. He orchestrated a four-year span at CSUN that saw 120 total wins and more Big West Conference wins (44) than any other four-year block in CSUN history. In the classroom, the team set new program GPA records.

“I want to thank President Jim Donahue and Director of Athletics Mike Matoso for welcoming my wife and sons to Saint Mary’s. I’m excited to be back in the West Coast Conference and can’t wait to begin our new journey at this great college,” Moore said. “There is an intense drive to win here and deep desire to educate the whole person. For a student-athlete and a family investing in education, that is life-changing.”

While at Cal State Northridge, for his work both on and off the field, Moore received the 2017 National Consortium of Academics and Sports’ (NCAS) prestigious National Student-Athlete Giant Steps Award. The NCAS awards individuals who use sport as a vehicle to inspire others to do great things using the positive aspects of sports.

In 2018, Moore led the Matadors to their best Big West Conference finish (third) in 16 years. CSUN won five conference series including three on the road for the first time since 2002. Five Matadors were selected to the All-Big West Team following the season highlighted by Albee Weiss’ First Team nod. The trio of Trevor Casanova, Weiss and Justin Toerner were all chosen in the 2018 MLB Draft. Prior to the season, the Matadors posted a program-record 3.05 GPA in the fall of 2017.

From 2014-16, Moore served as a member of the coaching staff for USA Baseball’s U-18 National Team. Serving as pitching coach to the team, he has helped Team USA to gold medal victories in international competition in 2015 and 2016. Moore began his tenure with Team USA in 2014 for the Tournament of the Stars and National Team Trials before becoming the team’s pitching coach in 2015.

Greg Moore was previously named by Baseball America as one of the Top 10 Assistant Coaches in College Baseball.

Moore began his collegiate coaching career at USF in 2002 as an assistant coach and recruiting coordinator for the Dons. In that role, Moore developed Diamond University, a life skills training program for student-athletes that he still uses today. He served in that capacity until 2009, when he took a position as the pitching coach at the University of Washington for one season before heading back to his alma mater.

Moore spent three seasons as the associate head coach at the University of San Francisco, where he oversaw pitching, academics, community service and summer placement. Three members of his pitching staff were drafted in 2012 and under his leadership the team had a conference-best 2.86 ERA, ranking sixth nationally.

While at USF, Moore coached three first-round draft picks and eight players taken in the first 10 rounds of the MLB Draft. Of the eight players, only one had been previously drafted out of high school and three were walk-ons. Before his arrival, the Dons had never competed in an NCAA Regional. During his tenure, USF reached the NCAA Tournament three times, including twice in his last three seasons.

Moore played collegiate baseball for San Francisco and was named to the West Coast Conference All-Academic Team in 2001. As a player, he won the team’s “Most Inspirational” award in back-to-back seasons and the award now bears his name. Moore earned his bachelor’s degree in Public Administration and completed his master’s in Sports Management at USF in 2001.