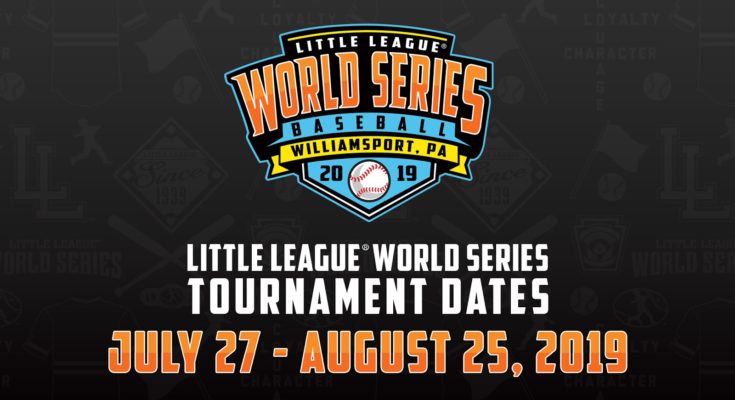 Each year, during the second week of June, Little League® International celebrates National Little League Week with the annual Little League Baseball® World Series (LLBWS) Luncheon. This year’s luncheon, held on June 13, featured Harry “Rusty” Sechler of the 1969 Newberry (Pa.) Little League team, and current Newberry Little Leaguers, Emerson Beagle and Braize Lambert, who assisted with the first-round pairings for the 2019 LLBWS in celebration of their 50th reunion playing in the LLBWS.

Note: Home and away designation will be chosen by a coin flip on Tuesday, August 13.

Pittsburgh Pirates President Frank Coonelly joined in the event’s festivities on Thursday and former Chicago Cubs pitcher, Steve Trout, as well, both sharing a few remarks to celebrate the 2019 MLB Little League Classic, which will take place on Sunday, August 18, between the Chicago Cubs and the Pittsburgh Pirates. Major Leaguers on both teams will open the day at the Little League International Complex where they will interact with members from each of the 16 LLBWS teams and attend some of the day’s games before going across town to Historic Bowman Field to participate in the MLB Little League Classic, airing nationally that evening on ESPN’s “Sunday Night Baseball” and ESPN Radio at 7:00 p.m. (ET).

With the LLBWS Luncheon concluded, the Road to Williamsport is officially underway as eight teams from around the world and eight teams from the United States compete for a chance to represent their region over the next eight weeks. The first of those 16 spots was officially filled earlier in the week as Cronulla Little League from Syndey, New South Wales, won the Little League Baseball Australia Region Championship to earn a trip back to Williamsport after an appearance in 2015. To learn more about all the Region Tournament dates and locations for the LLBWS, visit LittleLeague.org.

All 32 games of the 73rd Little League Baseball World Series will be televised by the ESPN Family of Networks or ABC – starting with the first game between the Caribbean Region and Australia Region on Thursday, August 15 at 1 p.m. on ESPN, and concluding with the Little League Baseball World Series Championship Game on Sunday, August 25 at 3 p.m. on ABC.

For the third-straight year, the Little League Baseball Canada Region Tournament will once again see coverage of round-robin games, both semifinal games, and the championship final, courtesy of CBC Sports. All coverage is subject to change.

For more information on the 2019 Little League Baseball World Series, including information on how to make your trip to Williamsport as enjoyable as possible, visit LittleLeague.org/WorldSeries.