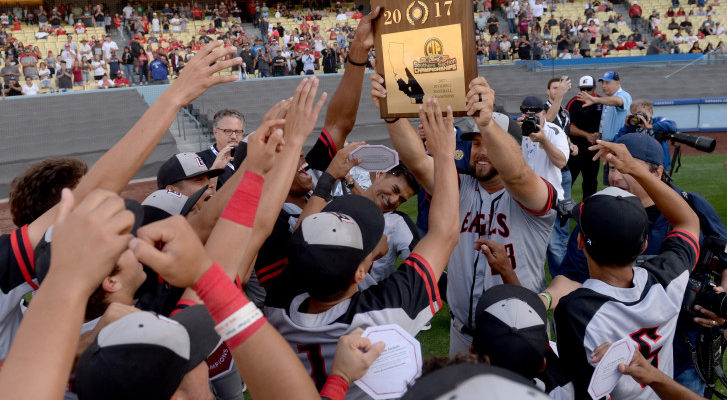 Here are 10 baseball teams from the Inland area to watch during the 2018 season.

1. ETIWANDA (27-3)
The Eagles won the Division 2 title last season, which propelled them up to Division 1 this season. Cody Freeman and Dalton Ponce will lead the offense, and Marcus Johnson already is a proven ace.

2. SANTIAGO (19-10)
The Big VIII League title race was wild in 2017, but the Sharks snagged a share of the championship. Brice Turang and Jacob Shanks lead Santiago’s offense and Tyler Frazier is a force on the mound.

3. CORONA (24-10)
The Panthers were the Division 1 runner-ups last season and could be in the title mix once again. Corona’s roster features two of the area’s best sophomores in Michael Flores and Isaiah Greene.

5. NORCO (17-11)
The Cougars could be a major player in what appears to be another competitive Big VIII League race. Clayton Owens is one of the area’s top power hitter, and Aaron Eden is an emerging star on the hill.

7. TEMECULA VALLEY (14-12-1)
Darric Merrell is one of the best players in Temecula Valley baseball history, and he has returned to coach at his alma mater. Merrell will be a good mentor for pitchers Ethan Clough and Max Rangel.

8. CITRUS VALLEY (19-7)
The Blackhawks surprised some by winning the Citrus Belt League last season, and they’ll face many challenges in the bid to repeat. Chaz McWilliams is one of the Inland area’s most exciting players.

9. NORTH (20-12)
The Huskies shared the Inland Valley League championship and reached the Division 1 quarterfinals in 2017. Tony Bullard possess unreal power at the plate, and he also is one of the team’s aces.

10. VISTA MURRIETA (22-9)
The defending Southwestern League champs have stumbled out of the gate, but the Broncos have faced a tough schedule. Jake Moberg and Andrew Mosiello are two of the top hitters in the lineup.