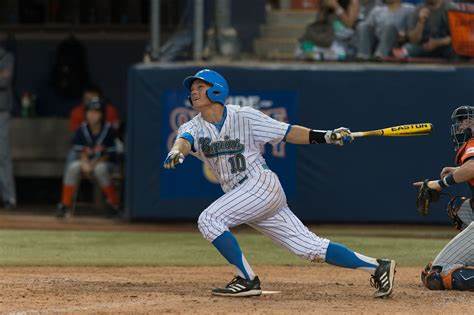 UCLA locked down its position atop the D1Baseball Top 25 rankings, powered by Louisville Slugger, after winning a 1 vs. 2 showdown on the road against Stanford. Three teams came into the rankings, led by Georgia Tech after a dramatic series win against North Carolina.

The Bruins went on the road and won a marquee series against Stanford, their second series win this season against a top-five foe. UCLA also took two of three from Oregon State in a Pac-12 matchup last month. The Cardinal drop three spots to No. 5.

Georgia jumps into the No. 2 after winning the week’s other top-five matchup, at home against Vanderbilt. The Commodores slide from No. 5 to No. 7.

NC State holds steady at No. 3 after winning a series at Boston College, and Oregon State returns to the top five, climbing two spots to No. 4, after sweeping Utah. Mississippi State rebounded from a series loss to LSU by taking two of three at Tennessee and climbs two spots to No. 6.

East Carolina jumps into the Top 10 at No. 8 after winning a road series at Houston, and LSU returns to the Top 10 after a big series win over Texas A&M. The Aggies just move back one spot to No. 10 after a 2-2 week that also included a win against Texas.
The biggest movers in the Top 25 rankings were Ole Miss and Clemson, which both jump seven spots, to Nos. 11 and 16, respectively. The Rebels swept Florida, one week after winning a big road series at Arkansas. The Tigers won a series against Louisville, which came into the series ranked No. 10. TCU moves up six spots to No. 16 after winning a series at Oklahoma.

Three teams enter the Top 25, while Florida, Connecticut and Oklahoma State move out. Georgia Tech made its season debut in the rankings, coming in at No. 17 after taking a taut series from North Carolina. The Jackets also have series wins against Virginia and at Louisville on their resumé.

UC Santa Barbara, which has not lost a weekend series this season, debuts at No. 23 after running its winning streak to five. And Baylor returns to the rankings at No. 24 after a 2-1 week that included a win over Dallas Baptist and a weather-shortened two-game split with Texas.