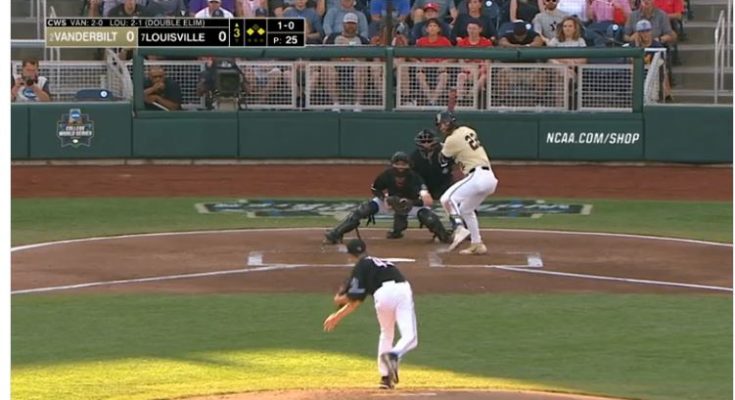 Well, this should have gotten Vanderbilt ready for what’s ahead.

Friday night was tense, tight, and with enough emotion at the end to light up Omaha. Or as JJ Bleday said, sitting in his locker with a nice, big blood splotch on his pants from sliding across the plate with the game-tying run in the ninth inning, “No one ever said it was going to be easy to make it to the national championship.”

The Commodores will not lose. Not very often, anyway. Shut them down for hours, get a late lead on them, annoy them — and the pitcher from Louisville who nearly beat them Friday night certainly did that  — they still find a way.

Their national seeding has always suggested they’re the team to beat at this College World Series — at No. 2, the highest in town. Their relentless winning spree gives the idea they can’t and won’t be stopped — 33 victories in 36 games. And now there is only team left from Michigan to prove it all wrong.

Maybe Friday night’s 3-2 escape against Louisville was just the thing to send Vanderbilt to the championship finals in the proper frame of mind. It was a very near thing, requiring two runs in the top of the ninth inning, and closer Tyler Brown getting two outs with the tying run at second in the bottom. Finally, someone had escorted obstinate Louisville from the building, after the Cardinals came within two outs of their sixth victory in an elimination game.

“Those are the games you want to play in, those are the games you’re going to play in at this time of the year,” said second baseman Harrison Ray, whose diving catch on a blooper was the last out. “Just being able to stay composed the whole way through that game and having each other’s backs, I think we’re a team that’s built for these type of games.”

Ethan Paul, who doubled in the get-even run in the ninth, thought so, too. “Anytime you can play a game like that it makes your team better. Those experiences don’t come often. When it’s high pressure situations you’ve got to execute and play good baseball.”

And Bleday: “To have a chip on your shoulder before you get in the actual (championship) series, it’s great.”

About that chip. Things got a little touchy Friday night. Louisville’s Luke Smith was a Vanderbilt vexation, and clearly enjoyed every one of his 10 strikeouts. By the end of the eighth inning, he had them down 2-1 on three hits, and the jawing between him and the Commodores — mostly Julian Infante after he was strikeout victim No. 10  — had reached the temperature where the umpires intervened.