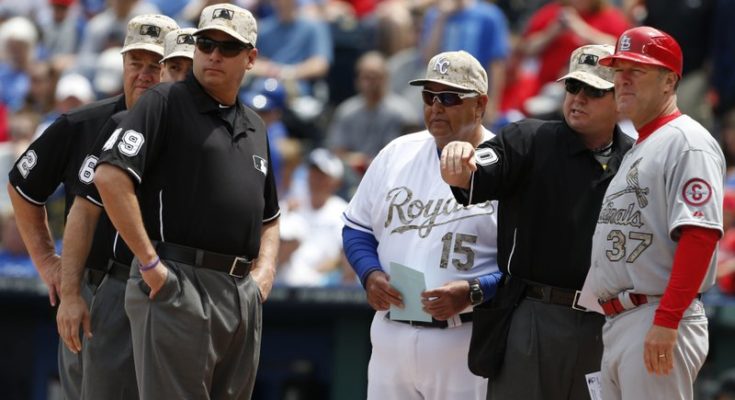 NEW YORK (AP) — Major League Baseball will look somewhat like high school ball this year under protocols to deal with the new coronavirus, with showers at ballparks discouraged and players possibly arriving in uniform, like they did when they were teenagers.

Team personnel will be banned from eating at restaurants on road trips.

Even the Phillie Phantic and Mr. Met will be missing, banned from the field along with all other team mascots.

The traditional exchange of lineup cards would be eliminated, along with high-fives, fist bumps, and bat boys and girls, according to a 67-page draft of Major League Baseball’s proposed 2020 Operations Manual. A copy was sent to teams Friday and obtained by The Associated Press. The guidelines, first reported by The Athletic, are subject to negotiation with the players’ association.

Teams will be allowed to have 50 players each under the plan, with the number active for each game still be negotiated.

Spitting is prohibited along with water jugs and the use of saunas, steam rooms, pools and cryotherapy chambers. Hitting in indoor cages is discouraged, batting gloves encouraged.

Batting practice pitchers are to wear masks, dugout telephones disinfected after each use. Players may not touch their face to give signs, and they’re not allowed to lick their fingers. Teams are encouraged to hold meetings outdoors, players spread apart.

Teams were asked to respond with their suggested input by May 22. The protocols were written by MLB senior vice presidents Patrick Houlihan, Bryan Seeley and Chris Young, and vice president Jon Coyles. Young is a former pitcher who retired after the 2017 season.

Protocols include details on testing for team staff, who are divided into three tiers. All others may not enter clubhouses, dugouts and the field.

Seats in the empty stands near the dugout should be used to maintain distance, according to diagrams in the manual, and the next day’s starting pitcher can’t sit in the dugout. Everyone must keep their distance during “The Star-Spangled Banner” and “God Bless America,”

Fielders are “encouraged to retreat several steps away from the baserunner” between pitches. First and third base coaches are not to approach baserunners or umpires, and players should not socialize with opponents.

Managers and coaches must wear masks while in the dugouts. The entire traveling party — including players — must wear personal protective equipment while on buses and flights. Restaurants are off limits on the road, including the ones in hotels, as are hotel fitness centers.

“We emphasize that this is a first draft, and will undergo several rounds of changes as we collect comments and suggestions from the clubs, the players’ association, players, and government officials,” deputy commissioner Dan Halem wrote in an email to owners, team presidents and CEOs, and general managers that accompanied the protocols.

“The document is designed to set minimum standards and identify best practices, but we have attempted to provide clubs with enough flexibility to achieve the desired health and safety objectives in a manner that is tailored to their particular circumstances, including ballpark configuration, location, and the nature of any local governmental regulations or restrictions,” Halem wrote.

Scoreboard video is prohibited but music allowed. While there won’t be fans, at least not at the start, it will provide a familiar background audio for the telecasts critical to MLB’s bottom line.

A ball will be thrown away after it is touched by multiple players, and throwing the ball around the infield will be discouraged. Personnel who rub baseballs with mud for the umpires must use gloves.

“Individuals must avoid any physical interactions (such as high-fives, fist bumps, or hugs) while at club facilities,” the manual says.

Tier 1 people in the plan include players, managers and coaches plus two each from among physicians, athletics trainers and bullpen catchers plus one strength and conditioning coach.