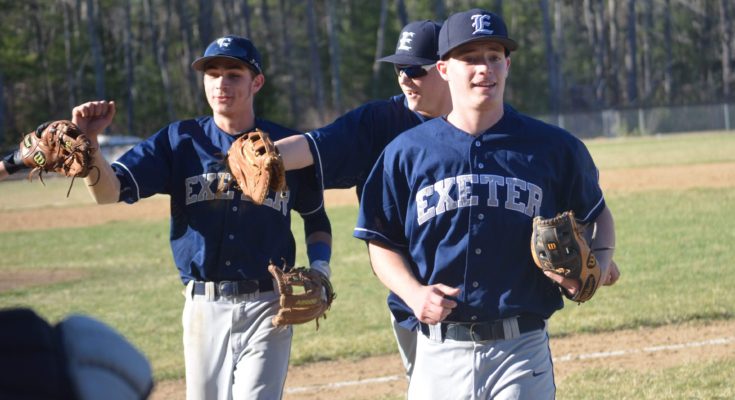 On its way to 22 consecutive baseball wins, Exeter High School overcame some unfavorable spots — often coming up with unfathomable finishes to keep the streak alive.

The streak finally came to an end Tuesday after an improbable comeback by visiting Concord.

The Blue Hawks held a 5-0 lead after two innings with ace Cody Morissette on the mound, but Concord turned the tide and scored six unanswered runs for a 6-5 Division I victory at EHS.

Exeter, playing a full weeks between games to weather, dropped to 1-1 on the season. Concord improved to 4-1 in Division I.

Exeter’s offense was led by the bat of Ben Malgeri, who was 2 for 3 with a two-run triple that blew the game open for Exeter in the second inning.

“We try to just take it one game at a time instead of trying to win them all at once,” said Malgeri, who has driven in seven runs in two games. “We’re still feeling pretty good. It’s only one loss. It’s baseball. What we did last year is a rarity. It just doesn’t happen. And games like this one today … they just beat us. That’s what happens. That’s baseball.”

Concord’s winning run came in the sixth inning, after Exeter relief pitcher Ethan Imbimbo gave up a single and two walks before pitch to the backstop allowed Concord to take the lead. Exeter then went down 1-2-3 in the seventh to end the game.

“Any time you take the field you’re trying to win and today our guys are disappointed, but you’ve got to give Concord a lot of credit,” Exeter coach Kevin McQueen said. “They played seven innings of baseball, they kept coming at us. Even down five to nothing, they didn’t stop. We knew they wouldn’t. They’re a quality program and Scott Owen does a great job with those guys.”