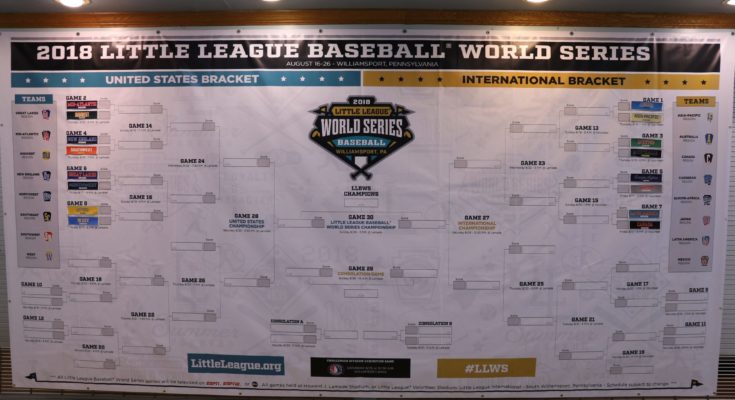 “Williamsport has always been a big part of our lives,” said Mr. Wilson. “Even in major league clubhouses, we watched the Little League World Series and it’s so much fun, so thank you for allowing me to be here and represent the New York Mets and enjoy this opportunity.”

Mr. Wilson and Mr. Matthews participated in the event’s festivities to celebrate the MLB Little League Classic, which will take place on Sunday, August 19. Major Leaguers on the Philadelphia Phillies and New York Mets will open the day at the Little League International Complex where they will interact with members from each of the 16 LLBWS teams and attend some of the day’s games before going across town to Historic Bowman Field to participate in the MLB Little League Classic, airing nationally that evening on ESPN’s “Sunday Night Baseball” and ESPN Radio at 7:00 p.m. (ET).

“To be in the Little League World Series is quite an accomplishment,” said Mr. Matthews. “That’s where the dreams start, and a lot of those players go on to finish them in the major leagues. On behalf of the Philadelphia Phillies organization, thank you for letting me be a part of this day.”

This year’s LLBWS will once again feature the Little League Baseball World Series Challenger Exhibition Game, as teams from Hazleton (Pa.) Little League and Highland Baseball Club (Evansville, Ind.) Little League will take the field. At the luncheon, David Drauschak and Lexi Mamourian, members of the Hazleton LL team, along with their League President, Ed Shoepe, and District Administrator, Jim Burns, assisted Mr. Wilson and Mr. Matthews with the first-round drawings. The 2018 Exhibition Game will take place on Saturday, Aug. 25 at 10:30 a.m. at Volunteer Stadium, and air live on Northeastern Pennsylvania’s and the Central Susquehanna Valley’s PBS Station, WVIA.

The 2018 LLBWS Luncheon also included the Team Hosts drawing for their Regional Champions for the year.

With the Little League World Series Luncheon concluded, the Road to Williamsport is officially underway as eight teams from around the world and eight teams from the United States compete for a chance to represent their region over the next eight weeks. The first of those 16 spots was officially filled earlier in the week as Gold Coast Little League became the first team from Queensland to win the Little League Baseball Australia Region Championship and earn the trip to Williamsport. To learn more about the Region Tournament dates and locations, visit LittleLeague.org.

All 32 games of the 72nd Little League Baseball World Series will be televised by the ESPN Family of Networks or ABC – starting with the first game between the Caribbean Region and Asia-Pacific Region on Thursday, August 16 at 1 p.m. on ESPN, and concluding with the Little League Baseball World Series Championship Game on Sunday, August 26 at 3 p.m. on ABC.

For the second-straight year, the Little League Baseball Canada Region Tournament will once again see coverage of round-robin games, both semifinal games, and the championship final, courtesy of CBC Sports. All coverage is subject to change.