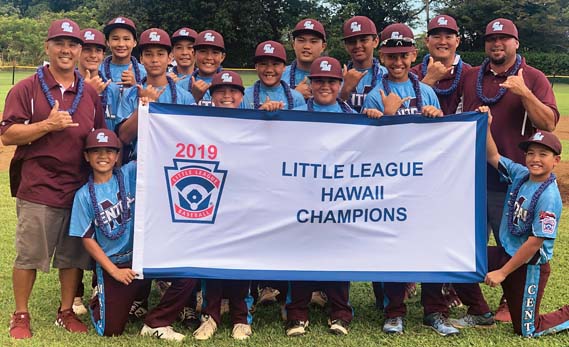 The Central East Maui All-Stars won the Hawaii State Little League Majors (11-12) title on Tuesday with a come-from-behind 8-5 win over Honolulu on the Big Island.

Earlier in the day, Honolulu beat CEM 7-0 to force the winner-take-all showdown in the double-elimination tournament. Central East Maui had just two hits in that loss.

In the finale, Logan Kuloloia led a 12-hit attack for Central.

Kuloloia was 3-for-4 at the plate with a run and four RBIs. His three-run homer in the third inning tied the game 3-3 and his RBI single in the fourth gave CEM a 6-5 lead that it would not relinquish.

Kuloloia also pitched the final 3 1/3 innings on the mound with three strikeouts, no walks and no runs allowed to preserve the victory.

Jaren Pascual was 2-for-3 with a run and Kaleb Mathias was 2-for-4 with an RBI for CEM.

Central East Maui advances to the West Regional in San Bernardino, Calif., set for Aug. 4-10. They are the sixth youth baseball team from Maui to win a state title this summer.

At the Little League 50/70 Intermediate (12-13) West Regional on Tuesday, Central East Maui was eliminated in a 2-0 quarterfinal loss to Abbott-O-Rabbit Little League of Anchorage, Alaska. CEM managed just one hit in the loss.

The game was a rematch from a thriller played Sunday when CEM scored nine runs in the bottom of the seventh inning of a 21-20 walk-off win over Abbott-O-Rabbit.

The CEM Intermediates end the summer with a 5-2 record.

CEM is going for its fourth straight trip to the Senior League World Series, held in Easley, S.C.