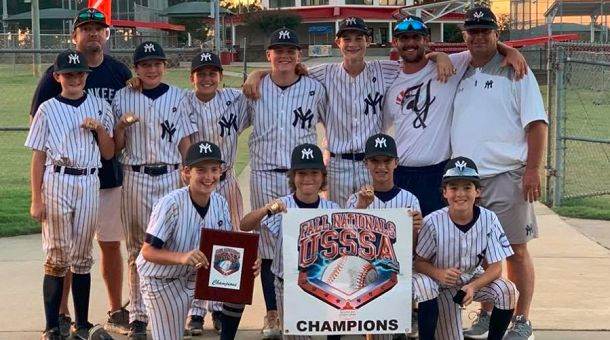 The Mississippi Yankees 12U- Rogers (pictured above) showed out this past weekend at the USSSA Fall Nationals Global World Series Qualifier in Southaven against some of the best local competition. The Yankees went 5-0 overall and outscored opponents 47-26 to hoist its first trophy this fall season. The weekend prior they finished in third place at the Fall Ball on the Turf Qualifier.

The 12-Open division was the largest of the seven divisions at this event, as it contained 19 of the 103 total squads registered. That meant there was plenty of competition for the Yankees, including those from three states outside of the host: Tennessee, Arkansas and Louisiana. Each of the teams would play two games in the first round before being seeded based on overall record. The top 10 advanced to a Red Championship bracket while the bottom nine were placed into a Blue Championship bracket.

The Yankees-Rogers got off to a hot start, winning 12-0 via the mercy rule against the Memphis Tigers 12U Gray. Manager Lee Gardner used two arms; Garrett Gardner for 2.1 innings and Jackson Harkins for the remaining 5 outs. Next up was a clash versus the Mississippi Clutch (AAA) who had dropped its first game 9-5 and would be competitive against the Yankees but lose again, 10-6. Starting pitcher Tyler Hester was the star for the winning side as he went 3.1 effective frames.

The Yankees-Rogers earned the third overall seed at the conclusion of pool play. Amazingly, seven teams finished the first round 2-0, so they were all sorted by average runs allowed. The two squads ahead of the Yankees was the EBC Gold who did not yield a run in its first two contests followed by the Gamers Baseball who allowed just one. This bracket phase promised to be tightly contested.

In the quarterfinals, the Yankees took on the program-mates of their first triumph – the Memphis Tigers. This time they were playing the White team and would win narrowly, 5-3. David Mosal (2.2 IP), Garrett Gardner (2 IP) and Artis Rayburn (.1 IP) combined for the victory. The semifinals was another challenge for the boys from Canton, as they met the No.2 overall seed, Gamers Baseball. They had just squeaked by the Rawlings Tigers-Black 3-2 and that probably took a lot out of them as the Yankees would prevail in a slugfest 10-8.