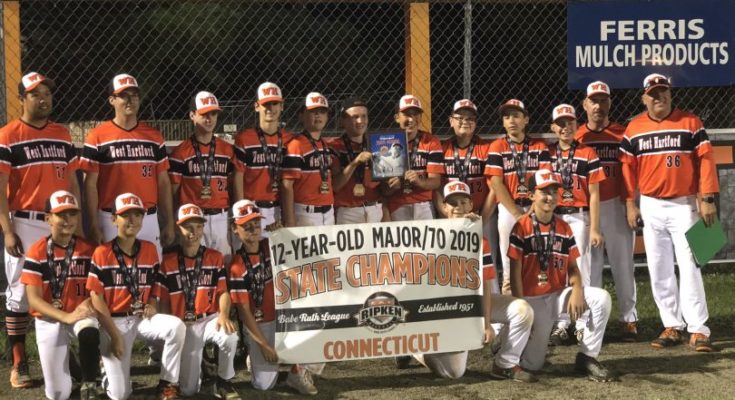 The West Hartford Youth Baseball League Bulldogs have continued their winning ways, winning the Cal Ripken state championship for the third year in a row, this time at the 12U level.

A majority of the team played for the U11 Bulldogs last summer.

“This team has some of the best young athletes in West Hartford on it,” said team manager Rob Hanawalt. “What makes them go, though, is their love for baseball and how they operate as one. All 14 players contribute and support each other in everything they do. It’s really cool to see that and be a part of it.”

Not only did the 12U Bulldogs win the championship on July 8, but they’ve also taken home first-place trophies in three other tourneys – the Al Leonard/Jimmy Fund Tournament, the Bethel Memorial Day Classic, and Cal Ripken District 3.

The Bulldogs were the first team from West Hartford to win back-to-back state championships – and now they have done it three years in a row.

The Bulldogs are undefeated this season, with a 16-0 record heading into the New England Regional Championship tournament in New Milford, CT, on Saturday, July 13.

They will face Cranston, winner of the Rhode Island state title, at 12:30 p.m.

The winner of the New England Regional Championship will earn a trip to the Babe Ruth/Cal Ripken World Series, to be held Aug. 2-9 in Branson, MO.

Even if they don’t make it to the World Series, the season won’t end. The Bulldogs are guaranteed to end their season on a high note, because if they don’t go to Branson, they will attend a week-long, once-in-a-lifetime tournament at Cooperstown Dreams Park being held the same week.

“The 12-year-old season is a special season in WHYBL,” Hanawalt said. “Most of these kids have been in the league since they were 5 years old, and it’s their last with us before graduating to the ‘big diamond.’ It was important to us to have these kids finish with a special experience,” he said