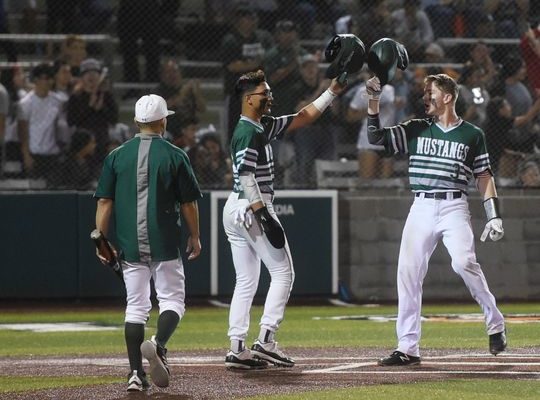 King and Tuloso-Midway decided to pull of their own version of “Midnight Madness” on Friday night.

With wind, rain and lightning approaching, King’s Eddie Molina looped a fly ball to right field that scored Derek Saenz to give the Mustangs a 9-8 victory in Game 3 of their Class 5A bi-district series. The game finished a few minutes before midnight.

That run completed what was the wildest and most competitive series of the four played between Districts 29-5A and 30-5A to start the 2019 High School Baseball playoffs.

Think about this stat in that series, in Games 1 and 3, King and Tuloso-Midway each scored 16 runs. King’s Jon Barrera pitched a complete-game shutout in Game 2 and King’s ability to take advantage of opportunities presented made a difference in coming back from an early 5-0 deficit in Game 3.

“It was very emotional, it was a roller coaster,” Molina said Saturday. “To overcome it, we had to work as a team and we got it done.”

Molina’s fly, though, was a handful of key performances this week in the four Class 5A series contested between the two South Texas districts.

• Gregory-Portland’s Isaac Ponce won a pitcher’s duel with Moody’s Josh Salinas, 6-0, in a winner-take-all bi-district game in Portland. Ponce gave up one hit and Salinas had 10 strikeouts in the loss.

“We had plenty of those this season,” Ponce said of tight games. “All season it has been like that. It is nothing new for us. We are used to it.”

• Calallen rallied from multiple deficits in its two wins against Carroll — a four-run deficit in Game 1 and a one-run deficit in Game 2 — while both Wildcat starting pitchers allowed big innings to the Tigers. The two — Hambleton Oliver and Justin Lamkin — rallied to finish their starts strong with at least five innings.